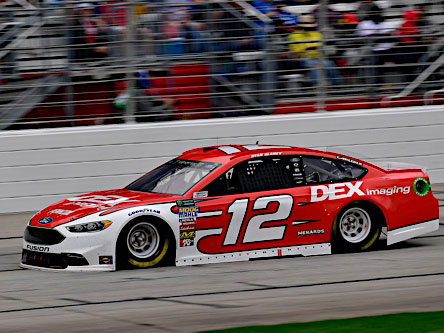 DEX Imaging will be featured as a primary sponsor for three 2018 Monster Energy NASCAR Cup Series (MENCS) races this season on Team Penske’s No. 12 Ford Fusion driven by Ryan Blaney, including events at Atlanta Motor Speedway in February, Richmond Raceway in April and Kentucky Speedway in July. The Florida-based company will also serve as a full-season associate sponsor on the No. 12 MENCS Ford Fusion in 2018.

In addition to the NASCAR partnership with Team Penske, DEX will be an associate sponsor on the No. 6 and No. 7 Acura Team Penske DPi entries competing in two important IMSA WeatherTech SportsCar Championship endurance races – the Rolex 24 Hours at Daytona in January and the 12 Hours of Sebring in March.

“It is always exciting to bring new partners to Team Penske and we look forward to continuing the growth of the DEX Imaging brand though motorsports and our race teams,” said Roger Penske. “DEX is a leader in its field and we believe the company can help create some unique opportunities for our teams and our other partners as well. With Ryan Blaney preparing for his first Cup Series season with our team, there is also great growth potential with DEX for the future.”

DEX plans maximize the new partnership by hosting its customers at the race track and creating unique experiences with potential clients at the events where the company is featured as the primary sponsor of the No. 12 Ford. In addition, DEX plans to work closely with Team Penske on a significant business-to-business program with other team partners and among the Penske Corporation companies.

Blaney enters his first full-time MENCS season with Team Penske in 2018 fresh off a winning season driving for Wood Brothers Racing. The High Point, N.C., native scored his first career Cup Series win at Pocono Raceway in 2017 and earned a spot in the NASCAR Playoffs, as he finished ninth in the final championship standings.

“It’s great to see new partners step up and become a part of the No. 12 team for this season and beyond,” said Blaney, who turned 24 in December. “I’m excited to race the DEX Imaging Ford for the first time in just a few weeks.”

The 2018 MENCS regular season begins with the 60th anniversary running of the Great American Race, the Daytona 500, on Sunday, February 18. DEX’s first race as a primary sponsor with Team Penske will be the Folds of Honor QuikTrip 500 at Atlanta Motor Speedway on Sunday, February 25.

About DEX Imaging
DEX is the largest independent provider of office technology in the U.S. Their full-spectrum solutions are operational in thousands of small businesses as well as enterprise, Fortune 1,000 companies. With a nationwide network of 4,000 support specialists, DEX chooses the best, most reliable models from the nation's top imaging equipment manufacturers, tested in-house for reliability, and pairs them with the unique business requirements. Digital intelligence, in house R & D, environmental consciousness and local stewardship are the hallmarks of DEX.

About Team Penske
Team Penske is one of the most successful teams in the history of professional sports. Cars owned and prepared by Team Penske have produced more than 470 major race wins, over 540 pole positions and 32 Championships across open-wheel, stock car and sports car racing competition. Over the course of its 52-year history, the team has also earned 16 Indianapolis 500 victories, two Daytona 500 Championships, a Formula 1 win and overall victories in the 24 Hours of Daytona and the 12 Hours of Sebring. For 2018, Team Penske will compete in the Verizon IndyCar Series, the Monster Energy NASCAR Cup Series, the NASCAR XFINITY Series and the IMSA WeatherTech SportsCar Championship. The team also races in the Virgin Australia Supercars Championship, in a partnership with Dick Johnson Racing, as DJR Team Penske. For more information about Team Penske, please visit www.teampenske.com.