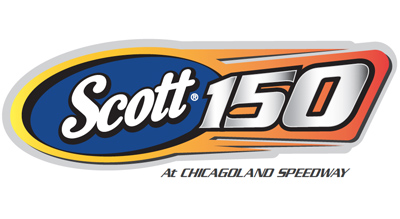 Kimberly-Clark Professional and the SCOTT brand have partnered with ARCA series sponsor, Menards, to participate in the 2015 ARCA Racing series. The SCOTT Brand is an official sponsor of the ARCA series, the ARCA Rookie Challenge and now, the SCOTT150.

The SCOTT 150 will celebrate the can-do spirit and pride people take in their craftsmanship by focusing on their June Rags In-A-Box promotion at Menards: a 200 count SCOTT Rags In-a-Box is only $5.99 after a $2 mail in rebate. SCOTT invites all professional contractors and DIYers to choose Rags In-A-Box to help with any home improvement project.

“We are proud to continue our relationship with Menards as the 2015 entitlement partner of the SCOTT 150 ARCA race at Chicagoland Speedway,” said Kimberly Brown, Customer Marketing Manager with Kimberly-Clark Professional. “This sponsorship gives us the platform to promote our wiping solutions, SCOTT Rags In-A-Box and SCOTT Shop Towels, to a wide audience of DIYers and professional contractors.”

As part of their sponsorship activation, SCOTT, alongside Menards, has invited 200 hard working contractors and their families to serve as the Grand Marshals of the SCOTT 150. This group will kick off the event, calling out the famous four words in motorsports: ‘Drivers, start your engines!’

Series officials are excited about the return of the ARCA Racing Series to Chicagoland Speedway. The 2015 ARCA Racing Series event at Chicagoland will mark the 15th consecutive appearance of the 63-year-old tour on the 1.5-mile speedway in Joliet, Illinois. And, it falls on Father’s Day weekend. “We are incredibly excited to welcome back the ARCA Racing Series in 2015 as we shift dates and begin our summer of racing on Father’s Day weekend,” said Scott Paddock, president of Chicagoland Speedway. “Alongside the NASCAR XFINITY Series, some of the world’s premier, young motorsports talent will be on display as we celebrate the action on track and the dads off of it.”

The Automobile Racing Club of America (ARCA) is among the leading auto racing sanctioning bodies in the country. Founded in 1953 by John and Mildred Marcum, the organization administers more than 100 events each year in multiple racing series, including the ARCA Racing Series presented by Menards, the ARCA/CRA Super Series, the ARCA Truck Series and the ARCA Midwest Tour, plus weekly racing at Toledo and Flat Rock Speedways.