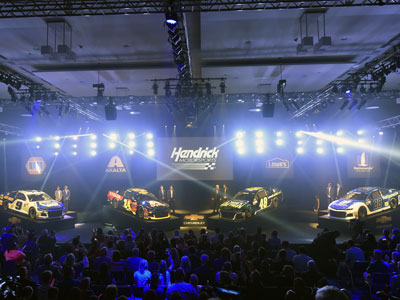 “To have Dale supporting Alex and Jeff supporting William, and of course Bill supporting Chase, and I’m supporting Jimmie, this is really special,” Hendrick said. “It’s so cool for me to stand here and see Bill Elliott stand beside the 9 car.”

Following a video making sure the crowd was properly amped up, the 2018 Camaros were unveiled one-by-one, as a light show highlighted the cars, set to a soundtrack of booming music.

“I’m jealous of this whole event,” Gordon smiled, “because all the years that I drove a car for Hendrick Motorsports, we never unveiled like this. This is amazing and I think it shows the commitment that Hendrick and Chevy and Camaro and all of our sponsors and drivers have for next year.”

“It was really cool,” Bowman said of working with Nationwide on the concept. “Going through all the ideas and everything was really special to have a hand in that. I can’t thank them enough for that.”

The spotlight then shined on Johnson’s No. 48 Lowe’s Chevrolet Camaro ZL1, revealing a completely new look for the ride. Lowe’s For Pros sits prominently on the hood of the sleek black paint scheme – and the yellow numbers are back.

“I’m very excited about my Lowe’s For Pros car,” Johnson said. “And then I’m just excited for the look of all the Hendrick Motorsports cars – they look great, great lineup of drivers and beautiful Camaro that we’re going to be racing.”

Next, attention turned to the No. 24 Axalta Chevrolet Camaro ZL1, and the crowd roared when the cover was pulled back to display orange, yellow and red flames lapping down the sides of the blue car.

“I’m definitely looking forward to seeing the flames on this race car, on this 24 car,” Gordon said. “And I just think William, his rise to this level, I’ve never seen anything like it, anybody get there faster than he has. And it’s because he’s earned it. He has incredible talent and it’s going to be a lot of fun to watch.”

Byron said it’s special to know that Hendrick is taking a chance on him just like he took a chance on a young Gordon.

“Jeff Gordon started out with Axalta,” he said. “It’s really neat to carry their colors to Daytona next year and I’m super excited about that.”

Finally, the brand-new No. 9 NAPA AUTO PARTS Chevrolet Camaro ZL1 was unveiled, featuring a blue, yellow and white look to match the logo on its hood.

“It’s awesome,” Elliott said. “With that car and that number, it turned out great. It’s great to have the NAPA colors back on it. I didn’t realize this until today, but I’ve been with them for five years starting next year, which is pretty wild, to know what they’ve done for me and really how far that partnership has brought me.”

Everyone on stage – not to mention in the crowd – was impressed by the full display.

“I was just telling these guys, I can’t pick which one’s my favorite out of the bunch here tonight,” Earnhardt said. “These cars look incredible. They’re going to be awesome out on the racetrack next year and Hendrick Motorsports is going to have an amazing season.”

There’s plenty of work left to do in 2017, as Hendrick mentioned on stage, but Thursday night’s event built plenty of excitement for what’s to come in 2018.

“This is the first time that we’ve ever done this, to unveil next year’s cars this early, and to have our sponsors, the fans and everyone here tonight is so special,” Hendrick said. “I’m just thrilled.”

“I can’t wait to get these cars on the track.”