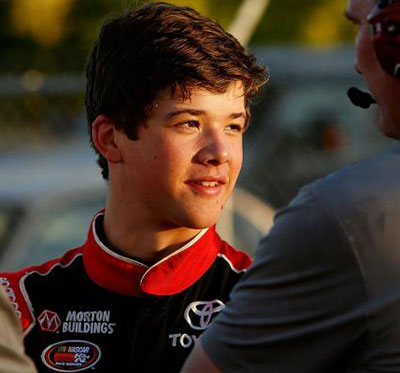 Burton made his NASCAR K&N Series debut last month at All-American Speedway (Roseville, Calif.), becoming the youngest driver to race in the series at 15 years, 8 days old. Burton has an extensive racing background in late model cars over the last few years. He earned his first pole position in the Late Model Series at just 11 years old, and then won his first Pro-Late Model race at age 12 and Super Late Model race at 14. Prior to his late model success, he was a three-time Quarter Midget Champion. He will compete for the NASCAR K&N Pro Series Rookie of the Year honors next season.

"I am excited to join a notable organization with such a successful history," Burton said. "I'm a young driver and have a lot to learn. The opportunity to work with this team and learn from my new teammates is huge for the growth and development of my career. I'm excited to see what 2016 brings."

Burton's current Super Late Model primary sponsor, DEX Imaging (deximaging.com), a privately held document-imaging dealer which has partnered with Burton since 2013, will continue to serve as the primary sponsor of the No. 12 K&N Series Toyota in 2016. Crew chief Rich Lushes, who led Burton in his K&N debut, will continue as crew chief for the 2016 season.

HScott Motorsports with Justin Marks had a successful 2015 K&N Pro Series East campaign, with all five of their drivers finishing in the top six of the final championship standings and the team combining to win seven of the 14 races. The team was led by William Byron, who edged his HScott Motorsports with Justin Marks teammate Scott Heckert to take home the championship.

"We are really excited to add Harrison Burton to our team next season," said team owner, Harry Scott, Jr. "Justin (Marks) and I pride ourselves on working with young drivers and preparing them to move to the next level, and we know Harrison has what it takes to be a contender in the K&N Series. We look forward to working with him in 2016 and helping him develop."

About DEX Imaging
DEX Imaging is the nation's largest independent dealer of Kyocera, Konica Minolta and Canon document imaging equipment. Headquartered in Tampa, FL, the company sells and services printers, copiers, fax units, and digital data management software. DEX Imaging was founded in 2002 with two objectives in mind - provide quality service and give back to the community. The company donates one third of its profits to charities and educational programs within the markets where DEX does business. For more information about DEX Imaging, please visit www.deximaging.com.

About NASCAR K&N Series
The NASCAR K&N Pro Series is the top step in NASCAR's developmental ladder before drivers progress to the three national series. Since 2007, NASCAR K&N Pro Series veterans have made a significant impact at the national level, including 2011 Daytona 500 champion Trevor Bayne, 2015 Daytona 500 champion Joey Logano, and 2014 NASCAR XFINITY Series champion Chase Elliott, along with Ryan Blaney, Austin and Ty Dillon, Kyle Larson, Ryan Truex, Darrell Wallace Jr., and others. The series introduces NASCAR fans to the next generation of stars, and the diverse mix of short tracks, road courses, and national series speedways appeals to a broad range of motorsports fans.