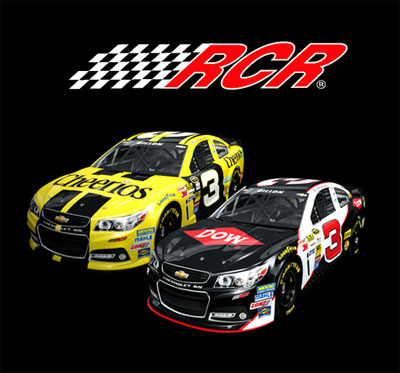 Two-Time NASCAR Champion will Drive No. 3 Dow/Cheerios Chevrolet SS in 2014

Dillon joins Paul Menard, who will drive the No. 27 Menards Chevrolet with crew chief "Slugger" Labbe, and Ryan Newman, who will drive the No. 31 Caterpillar/Quicken Loans/Wix Filters Chevrolet with crew chief Luke Lambert, as full-time Sprint Cup Series drivers under the RCR banner in 2014. The Welcome, N.C., organization has invested significant resources in its competition and engineering departments to prepare for the 2014 season. Many of these changes were spearheaded by the additions of Dr. Eric Warren (director of competition) and Mark McCardle (director of racing operations) to the organization, along with the recent addition of Mike Coughlan (technical director).

Dillon's program will be led by crew chief Gil Martin, a 13-year veteran of the organization who led Kevin Harvick to six chase berths. It also marks the highly anticipated return of the No. 3 to Sprint Cup Series competition. Dow and General Mills' Cheerios brand will be the primary brands featured on the No. 3 Chevrolet SS throughout the season.

"My grandfather and everyone at RCR have done a great job of not pushing me too quickly into the NASCAR Sprint Cup Series," said Dillon. "I feel like I've been able to spend adequate time in the NASCAR Camping World Truck Series and the NASCAR Nationwide Series preparing for this next step in my career. I am thrilled to be making this move with partners like Dow and Cheerios, along with some long-time partners who have supported me and RCR throughout my career. I am truly grateful and looking forward to this opportunity."

The program between RCR and Dow is driven by several Dow businesses that are directly involved in R&D projects and strategic business and relationship opportunities unique to the NASCAR community.

"We see this as a great opportunity to partner with a historic team like Richard Childress Racing that is synonymous with success, integrity and championships, and a championship driver in Austin Dillon," said Joe Harlan, executive vice president of Dow. "Austin's winning passion is representative of Dow. Our employees and customers were very supportive of our debut into our partnership with RCR during 2013 and they are looking forward to continued involvement with Austin next year. Dow's technology-focused, market-driven, customer-centric organization aligns perfectly with the performance-driven values of RCR and NASCAR. We look forward to being a part of Austin's rookie NASCAR Sprint Cup Series season and continued success in NASCAR."

General Mills is entering its 17th year in NASCAR and its sixth year with RCR. They began their association with Dillon last year when the Minneapolis, MN.-based company used its Honey Nut Cheerios brand to help Dillon make his inaugural Daytona 500 start. Today, Cheerios launched the @CheerThe3 communities on Facebook and Twitter so fans can access exclusive content and share their excitement around Austin and the No. 3 race team.

"With Austin Dillon's success in both the NASCAR Nationwide Series and NASCAR Camping World Truck Series, we're proud to continue our support of Austin, a proven winner and passionate driver," said Gregg Dorazio, manager of shopper marketing and motorsports for General Mills. "He shares many of the same values as the Cheerios brand and has a bright future in the sport. We're excited to join him in this next step in his career. We're also proud to continue our partnership with RCR and continue our heritage in the sport."

In addition to Dow and Cheerios, several long-time partners associated with RCR and Dillon will join him as he moves to full-time competition in the Sprint Cup Series including Realtree Outdoors, Bass Pro Shops, American Ethanol and the University of Northwestern Ohio.

For additional information on today's announcement, and all that's happening at RCR, please visit www.rcrracing.com.

About Dow
Dow (NYSE: DOW) combines the power of science and technology to passionately innovate what is essential to human progress. The Company connects chemistry and innovation with the principles of sustainability to help address many of the world's most challenging problems such as the need for clean water, renewable energy generation and conservation, and increasing agricultural productivity. Dow's diversified industry-leading portfolio of specialty chemical, advanced materials, agrosciences and plastics businesses delivers a broad range of technology-based products and solutions to customers in approximately 160 countries and in high growth sectors such as electronics, water, energy, coatings and agriculture. In 2012, Dow had annual sales of approximately $57 billion and employed approximately 54,000 people worldwide. The Company's more than 5,000 products are manufactured at 188 sites in 36 countries across the globe. References to "Dow" or the "Company" mean The Dow Chemical Company and its consolidated subsidiaries unless otherwise expressly noted. More information about Dow can be found at www.dow.com.