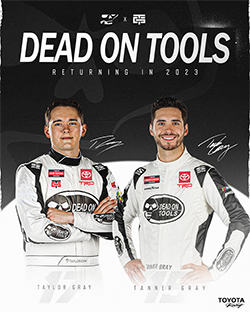 Dead On Tools Expands Partnership with Tricon Garage for 2023

Illinois-Based Company to Appear as Primary Partner in Multiple Events

MOORESVILLE, N.C. (November 22, 2022) – Dead On Tools has extended its partnership with TRICON Garage significantly for 2023. The innovative tool and work gear manufacturer will serve as an anchor partner on the Nos. 15 and 17 Toyota Tundra TRD Pros with drivers Tanner and Taylor Gray.

The expanded partnership will feature the Dead On Tools brand on the hood of a TRICON Tundra for 15 events throughout the 2023 season, while taking an associate role in all remaining races.

Illinois-based Dead On Tools is a subsidiary of Pull'R Holding Company LLC and is one of the world's fastest-growing brands of hardware and storage gear. While still carrying its cornerstone precision tools, the brand has focused intently on mastering professional tool belts and other styles of soft-sided accessories.

"The partnership here is a no-brainer," Dead On Tools Marketing Manager Brian Ranallo said. "This team is everything partners look for and more. We could not be more thrilled to link with the Gray family and get the Dead On Tools Toyota Tundra on the track!"

Tanner Gray will begin his fourth full-time campaign in the NASCAR Craftsman Truck Series (NCTS) when the series descends on Daytona (Fla.) International Speedway in February. The youngest champion in NHRA Pro Stock history has his sights set on a personal reset next season with the opportunity to prove himself as a race-winning threat in the NCTS.

"2023 is going to be an exciting year of change for our team and myself," said Tanner Gray. "I'm thankful for Brian and the entire Dead On Tools family for continuing their partnership with us, and I hope we can capture my first win together."

In accordance with NASCAR's minimum age requirements, Taylor Gray will join the Truck Series full-time after his 18th birthday on March 25, 2023. The younger Gray has forged a name for himself in the ARCA ranks with seven career victories between the various series, including three national, one East and one West win in 2022. The New Mexico transplant also has 13 Truck Series starts in his budding career, earning two top-10 finishes along the way.

"I'm eager to tackle the Truck Series full-time next season after my 18th birthday. It's going to be a major challenge, but one that I am certainly ready for," said Gray. "Our team strives every day to improve, and it's a privilege to have a partner like Dead On Tools who believe in what we are building and want to grow together."

A detailed schedule of events for the Dead On Tools Toyota Tundra TRD Pros will be announced at a later date.